The Alliance, Ohio Train Wreck of 1979 was the derailment of a Conrail freight train that happened on September 12th at 4:30 AM due to a missed traffic signal.

The train was allegedly carrying perishable foodstuffs, lumber and 1980s model autos. Coverage and photos appeared in several newspapers. Depending on the paper, the damage was inexplicably reported anywhere from $2 million to $10 million dollars. The average cost of train derailments in the 1970s was only around $50,000. An article from June of 1979, that probably escaped government censor because it appeared in a small circulation local paper, describes a similar, and likely the real accident. The Train Order shown at right puts engine 1912 coming out of Monon prior to the accident reported in the local paper listed above. Despite being even larger, and allegedly carrying the same type of cargo, this wreck was not even covered in any other newspaper or medium. Also, the article mentions the necessity of the National Guard given the size of the cleanup, but the train must’ve been carrying something far more sensitive than food and wood to have created such an official stir.

It's proposed that the Alliance wreck was a cover for the spill incident at Three Mile Island that happened less than three months before on March 28th, 1979. It’s been proven that the government tried to dispose of the waste using secret trains to transport it throughout the country, often remaining on the trains while the bureaucrats fought over which states would serve as dumping grounds. Engine 1912, then, likely was pulling cars loaded with nuclear and radioactive chemicals, but given the high anxiety that resulted from news of the release of chemicals from the plant after the partial core meltdown, the government feared a likely national panic caused from learning of this second nuclear spill. 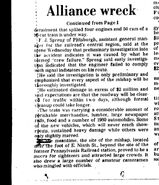 This article says it was $10 million 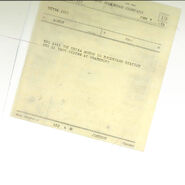 Also found this train order which confirms, despite ‘official reports’, that this train existed

The movie Super 8 includes a scene where a train from Area 51 is derailed in Ohio in 1979.