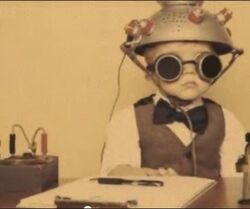 A Chronovisor is a theoretical time viewer, initially of past events. François Brune claims that Pellegrino Ernetti was a developer of the chronovisor that enabled the viewing of the crucifixion of Jesus.[1][2] Andrew Basiago claims that DARPA has vastly improved chronovisor technology.[3]

Pellegrino Ernetti, an Italian Roman Catholic Benedictine monk, claimed to have witnessed the crucifixion of Jesus through a device called the "Chronovisor". He leaked information about this device to François Brune, and embellished the story that he had invented it. Although he may have had a part in advancing its application, Ernetti was most likely not its inventor. Circumstantial evidence suggests that the chronovisor was originally an artifact,[4][5] from an unknown source, that was used for time-viewing. The artifact was highly modifiable, because in the decades to follow, it was redesigned for time travel application. The Chronovisor was a study by key members from the Pontifical Academy of Sciences, which may have included Agostino Gemelli,[3] and the Los Alamos National Laboratory team, from at least 1947.

Physicist Enrico Fermi's contribution to modifying the chronovisor[3] may have been with the use of the FERMIAC. It was an analog computer invented by Fermi, to aid in his studies of neutron transport.[6] Fermi's late research in Rayleigh–Taylor instability may also have contributed to time-travel research and development. If Wernher von Braun was advised of the chronovisor, it probably wasn't until around 1954. Likely by 1959, the chronovisor was then absorbed into the DARPA program. It was radically improved in the coming decades. Andrew Basiago, a former participant in the Project Pegasus program, has described its 40-year evolution.[3]

Archaeologist Jonathan Gray, author of Dead Man's Secrets, highlights ancient records that describe a type of "screen projector" used in temple rituals. The projector moved on wheels to give the projected image movement. According to Gray's interpretation of the records, sounthe d emitted from the "ancient projector" during temple rituals while following image movements, so as to produce an emotional effect.[5] Gray's description of this ancient device is comparable to Andrew Basiago's description of the chronovisor in its semi-original form, from the Los Alamos National Laboratory team. It too projected images on a display screen.[7]

The chronovisor may have been a variant of this "ancient device" that Jonathan Gray describes in his book, Dead Man's Secrets. The study teams had modified it by building a large cabinet, and using cathode-ray tubes for the viewing of received events on a display screen. It is also claimed that a control panel with a series of buttons and levers was also added for selecting the time and location to be viewed. It was also known to locate and track specific individuals. According to Ernetti, it worked by receiving, decoding and reproducing the electromagnetic radiation left behind from past events. It could also pick up the audio component or sound waves emitted by these same events.

The chronovisor's alleged capabilities are strongly reminiscent of the fictional time viewer which is featured in T. L. Sherred's 1947 science fiction novella, E for Effort.[8]