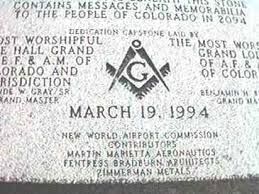 Denver International Airport is the largest airport in the U.S. by total area, located in Denver, Colorado. Its presentation of plaques, murals and sculptures makes it a hotbed for conspiracy theories.

The dedication marker states that the airport was commissioned by the New World Airport Commission, which hasn't been found to exist. There are many rumors about this airport due to its size and some of the odd murals inside. Conspiracy theorists point to several masonic symbols throughout the airport, which lead many to believe that it is a bunker for the Illuminati when the apocalypse comes.

The New World Order conspiracy thickens with a mural of a soldier wearing a gas mask and carrying an AK-47 in one hand, and a scimitar in the other. The scimitar is shown stabbing a dove which is a symbol of peace. Many believe this is supposed to be symbolism for the establishment of a New World Order or an act of genocide.

It is just as controversial on the outside, as it is on the inside. The runways are said to resemble a swastika, and nearby is a statue of a red-eyed horse, whose eyes light up at night. The statue is known for having fallen over and killing the sculptor who made it. Its nickname is Blucifer.

It's reported that some murals have been blocked off from public viewing.

There is a note of an alleged child who had died in the Auschwitz concentration camp, that is posted on a wall of the Airport.

Retrieved from "https://conspiracy.fandom.com/wiki/Denver_International_Airport?oldid=19780"
Community content is available under CC-BY-SA unless otherwise noted.