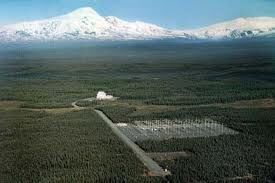 The High Frequency Active Auroral Research Program (HAARP) is a research program that is funded by the U.S. Air Force and can be found in Gakona, Alaska. It is believed by conspiracy theorists to be a weapon capable of weather modification and even mind control. “Weather control” was blatantly stated in the HAARP patent.

The program may have its origins in the cloudbuster, which was invented by Dr. Reich before all of his work was destroyed by government order. This device had the ability to form or diminish clouds in the nearby atmosphere by changing the amount of “orgone energy” found within the atmosphere. HAARP may be a far more advanced version of his original invention.

Jesse Ventura tried to enter the HAARP facility back in 2009 for the first episode of his show, but was denied entry and was told to leave by a individual who claims to be the manager. While Jesse was talking to the man the camera equipment's audio and sound begin to mess up and were obviously interfered with.

Jesse leaves and attempts to interview locals, but most of them don't want to be interviewed or talk about HAARP. Jesse finally finds somebody who will discuss HAARP with him. Jesse interviews the owner of a coffee shop/trading post and she tells Jesse that the people behind HAARP tell the locals that it is just a program to research the northern lights, but because they never tell the public of their findings this has made many skeptical.

It was announced in May of 2014 it was announced that HAARP would be shut down later that year. This appears to be a lie, as money from the black budget is still going into HAARP.

Retrieved from "https://conspiracy.fandom.com/wiki/HAARP?oldid=19793"
Community content is available under CC-BY-SA unless otherwise noted.