Heart Attack Gun (HAG) is a weapon that was revealed in 1975 at a hearing of a committee led by Frank Church. At the hearing, Church showed off the CIA's heart attack gun, which was a modified Colt 1911.[1]

The gun is electrically powered by a battery and fires an extremely small bullet of ice with frozen shellfish toxin in the centre. According to Mary Embree, a former CIA employee, the heart attack gun reportedly could pierce through clothing, leaving no signs of impact on the skin except a small red dot. The targeted person would feel nothing beyond a slight sting, comparable to a mosquito bite.[1]

CIA director William Colby stated that in 1952 the CIA began a super secret research program, code-named M.K. Naomi, partly to find countermeasures to chemical and biological weapons that might be used by the Russian KGB.[1]

The cause of death of the victims is said to be heart attacks and the gun is used by the CIA to commit assassinations that can't be traced back to them. Many conspirators believe that the CIA is still using this gun today.

The weapon is linked to the untimely and mysterious deaths of public figures, which includes: 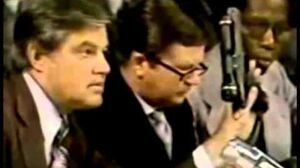 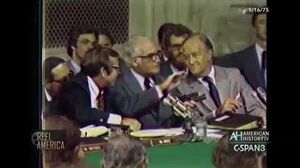